What the reopening of New York City in July entails

Mayor Bill de Blasio is pushing for the complete reopening of New York City starting July 1st. "We are ready for the full re-opening of shops, commercial activities, offices, theaters, including 100% restaurant capacity."
So much progress has been made, hospitalizations and infections have decreased, vaccination is increasingly on the rise and all this makes the most optimistic forecasts now plausible. "This will be the Summer of New York," the mayor added.

Broadway could take a little longer. For now, it seems that around September/October is probably when the lights of Broadway will shine bright again. It just takes more time to put together a complete Broadway production hence why it will take longer.
Additionally, the Mayor keeps reminding all New Yorkers to go out and get vaccinated (those that have not done it so far) as soon as possible to help the city and its reopening.

Something worth noting is that State and Federal leaders could intervene and change reopening times and terms if needed. For example, governor A.Cuomo while assuring that he hopes to completely reopen the state of NY before July 1st, he also added that the re-opening will be managed on the basis of actual data & numbers.

Meanwhile, the tulips are in full bloom all around the city

We spent most of the winter attending outdoor-only bars and restaurants. To make room for gazebos and igloos, many streets have been closed to traffic (entirely pr partially) and New Yorkers have begun to appreciate these new & improved pedestrian spaces. 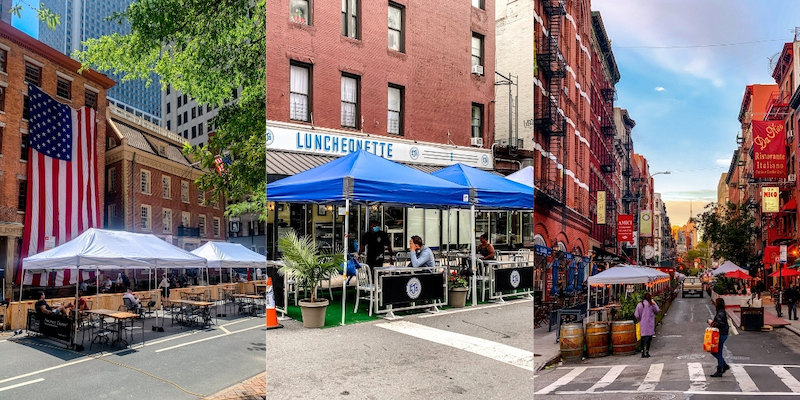 The program was originally supposed to expire in the Fall of 2020 but it was later extended and now it seems it will be a permanent fixture in NYC's future. The program will be managed by the Department of Transportation and volunteers.


For many years whales have been a rare sight in and around the New York Harbor. Pollution and commercial fishing have drastically impacted the whale population along the East Coast of the United States. Additionally, the scarcity of a small fish called the menhaden, the primary prey of humpback whales, has eliminated the ecosystem's ability to support large mammals in the waters around NYC.

But in 2012, restrictions on menhaden fishing were finally adopted to ensure that the natural ecosystem could survive. The continued and tireless efforts of environmental groups are now starting to pay off. The water is getting cleaner, the food chain is being restored and the whales are coming back!

The first company to propose outings for whale watching is the Seastreack with a program that starts next May 8th until the end of November. One of the best places to spot whales in the New York Bend is the very tip of Sandy Hook. During the cruise, you may see humpback whales, dolphins, pelagic birds, sea turtles, and many other marine species.


Departures are scheduled from Battery Maritime Building Slip 5, the same pier from which the ferry to Governors Island departs, and from East 34th Street Ferry Landing. Cruise cost $ 55 for adults $ 30 for children 0/12 years. Well-stocked bar on all cruises offers beer, wine, spirits, soft drinks, and prepackaged snacks.
We are your local Tour Agency in New York City