Main Menu
You are here: What to know | Fall in New York

Fall in New York: What to do and What to see

Categories: What to know
Page Index – Fall in New York: What to do and What to see

New York Weather in the Fall

Is your next trip to the Big Apple scheduled for September? In New York, the real Fall starts with October, a month that still gives you a mix of warm and cool days, few rainy days, and beautiful foliage landscapes in city parks such as Central Park, or along the Boulevard such as Park Avenue, or in the north part of Manhattan. This is the perfect time to take long walks and take wonderful photos back home with you, or enjoy a cruise around the Island of Manhattan, or perhaps celebrate the Oktoberfest at Bear Mountain State Park.

If you can choose the time of your vacation, September is one of the best months to visit the Big Apple. The temperatures are mild, the rainfall drops, and walking around the city will be a pleasure. The perfect month to go on one of the Observatories with outdoor terraces, the Empire or the Top of the Rock, visit Liberty and Ellis Island, enjoy the views of Central Park from the terrace of the Metropolitan Museum, stroll along Hudson River during the sunset.

Temperatures will set around 60° to 77°F, 16° to 25°C degrees, leaving you free to walk without suffering the damp heat of the months of July and August.

The rain-days will decrease from the high of July with its 11 days of rain, to a more reasonable and pleasurable 6-7 days of rain in September.


What to See in September - Events September

Since September 11th, 2001, the city of New York brings a feeling of unity and solidarity. On this day, we remember the attacks at the Twin Towers, the commemorations are many, all are aimed to remember and honor those we lost while being together united; a triumph of human dignity and valor over the depravity of terror by affirming the fundamental value of human life. Of all the most engaging celebrations is certainly the Tribute in Light, the light installation that on September 11th projects two beams of light and illuminates the place where the Towers once stood bringing them back to life. The lights projected toward the sky can be seen at a great distance. 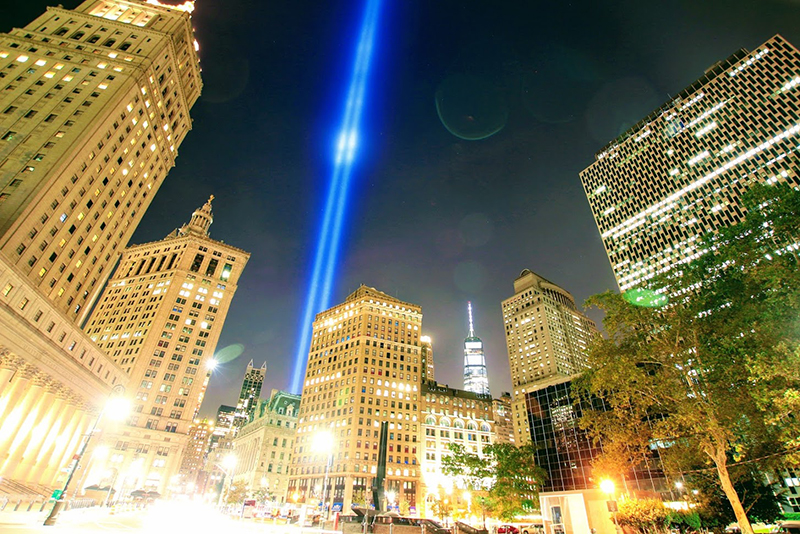 The best activities to do in New York in September

New York City’s weather in October: In the first two weeks of October, high temperatures during the day arrive, and sometimes can exceed, 68°F/ 20°C but the lows can also drop down to the low 50s°F / 10°C during the night. Perfect weather for all outdoor activities. Towards the end of the month, temperature get a bit lower but it is the best time to admire the foliage.

October is one of the least rainy months of the year, an average of 9 days of rain per month, do as the New Yorkers do, look at the weather before you leave the house / hotel, most app will tell you if and when it will begin to rain and where in the city (neighborhoods.) Might not be 100% accurate all the times, but always better than nothing. Weather in New York.


What to See in October - Events October

The event of the month is without a doubt the Halloween Party with the famous Parade in the West Village. If you think you want to partake in the parade or simply check it out from the sidewalks, here's where you can find all the information: Halloween New York. But do not forget the parade for Columbus Day, the pride of all the Italian-American New Yorkers in New York.

In November, the temperatures drop dramatically around 55°F/ 12°C to reach 40°F - 5/6°C at night, snow can already make a first appearance, and if that happens, you do not want to miss a snowy Central Park. Rainy days continue to be scarce during the month, and during the first few weeks, you might still catch the show of colors changing in the city parks and along the avenues; if you love photography, fall in New York is your season.


What to See in November - November Events

The main event of the month is Thanksgiving Day - Thanksgiving with the Macy's Parade, balloons with floats and the incredible show that takes place in front of New York's Macy Department Store in Heralds’ Square. Of course, I recommend watching the parade, but also walking in the early morning around the floats to check out the preparation and release of the balloons from their nets, go to 79th street and Central Park West in the early morning, the show is unique and you will not want to miss it!


The best activities to do in New York in November

Celebrate on The Bateaux
Thanksgiving Cruise
Choose between Lunch and Dinner to celebrate Thanksgiving in New York.

Visit New York in the Fall – Here, our Tips:

What to do in the Fall
As we have seen together, the activities that New York offers during the Fall are several, important parties and events, parades and opportunities to still enjoy some outdoor adventures and open-air walks. Due to some of these special events, the prices may be higher on some weekends / dates, but there may be good deals around, and remember that your Hotel does not have to be necessarily in the heart Times Square! We have some great tips on Where to stay in New York – How to choose a Neighborhood& Hotel. Book ahead of time to get good deals and use one of the special PASSes that include activities and attractions for reduced rates.

We are in the Fall, therefore make sure to bring a heavy jacket for the evenings or in case of sudden cold-fronts, towards the end of the season make sure to also have a hat and gloves and sweaters, comfortable shoes in case of rain and/or snow.