With this 2.30-hour walk, we'll discover some of the most important sites around Wall Street and the Financial District including the option to visit either the 9/11 Memorial or the historic South Street Seaport with the new Pier 17. It's a perfect tour to combine history, curiosities, hidden gems, and more!

What to visit in the Financial District

Some of New York's oldest buildings are found in the Southernmost tip of Manhattan once called New Amsterdam and funded by the Dutch in 1624. The legendary Fraunces Tavern where George Washington bid goodbye to his troops, the Federal Hall National Monument where he was sworn-in as 1st President of the United States, the first public park Bowling Green, and the two oldest Churches – Trinity Church, and St. Paul Church & much more!

Not only history, as the Financial District is also the symbol of New York's economic power with the famous New York Stock Exchange right on Wall Street. Also linked to Wall Street, the iconic Charging Bull and the "new-ish" Fearless Girl will be part of our stops as well. Did you know that the Fearless Girl sculpture was initially placed right across from the Bull on International Women's Day on March 8th, 2017? Such placement caused quite a stir in New York City with litigations brought forward by the sculptor and creator of the Charging Bull - Arturo Di Modica. We'll hear this and many other stories during the tour.

The best thing about being a private tour is that it allows us the opportunity to stop for photos and videos as we please while recounting past & present anecdotes.

We offer two versions of this tour to accommodate all visitors including those that might have already visited the 9/11 Memorial in previous stays.

How do I choose the right Itinerary?

The Classic Wall Street & 9/11 Memorial is perfect for all first-time visitors and for those of you that might have not yet visited the 9/11 Memorial. During our walk, we will visit all top landmarks around the Financial District – Bowling Green, The Charging Bull, Stone Street, Wall Street, The Fearless Girl, Trinity Church & its Cemetery (if open - now closed due to construction.) We'll conclude our tour exploring the World Trade Center Area with Liberty Park, the 9/11 Memorial, and the Oculus.

Wall Street's Hidden Gems & The South Street Seaport  is indicated for those of you that might have already visited the 9/11 Memorial and the Financial district and might like to focus more on secretes and anecdotes that usually are not part of a classic tour of this area. Itinerary Highlights – Bowling Green with Steamship Row, The Charging Bull, Stone Street Historic District, Wall Street, The Fearless Girl, Elevated Acre, a secret Candy Shop, Pier 17, Historic Seaport District with the hidden Cannon Walk.

Highlights of The Financial District & WTC

A new Park in Lower Manhattan, Liberty Park is an elevated park that opened to the public in 2016. The park offers panoramic views over the World Trade Center & Memorial Site. More than 100 meters long and 25 meters high, it is a real gem and an oasis outside the crowds and buildings of Downtown Manhattan. It takes less than 5 minutes to walk it from one end to the other, but you can stop here and reflect or spend some time during your lunch break. "It offers a very particular perspective on the 9/11 Memorial and is open to the public, and people are welcome 24 hours a day, seven days a week, all seasons."

After the tragic events of September 11th, 2001, the World Trade Center has undergone a complete transformation. Depending on the option you decide to book, we will visit the 9/11 Memorial with the 2 Pools, the new ONE TOWER, and the new elevated Liberty Park. We will walk inside the new Oculus, the work of the famous architect Calatrava for a walk underground along white marble corridors to reach Brookfield and the Hudson River.

For those who would like to visit the ONE Tower Observatory, on the 102nd floor of the #1 WTC, we recommend the new Sightseeing PASS which includes access to the 9/11 Museum too – The Sightseeing PASS.

The Oculus: A Station or Shopping Center?

Oculus is the new Transportation HUB connecting the former PATH Station at World Trade Center with many MTA subway lines at Fulton Station. It's also the new Manhattan Mall – New Yorkers say that if Grand Central Terminal is a station with some stores, Oculus is a Mall with some Trains. Critics called it the son of the post-Instagram era, however, it's hard not to be impressed by the sheer sculptural and monumental beauty, the white marbles, the effects of light shining through from the glass ceiling. Even to the toughest critic, it might become difficult to not stop and photograph the open space. 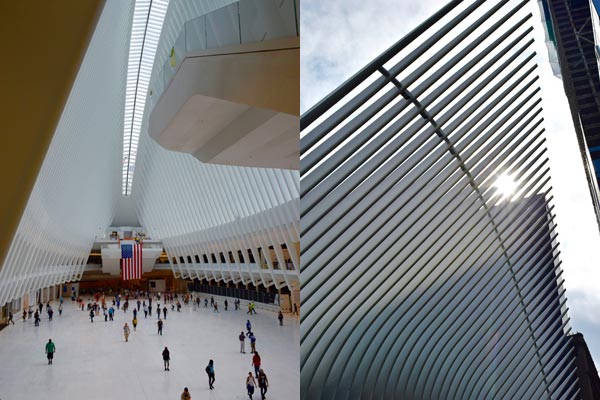 Probably one of the neighborhoods to change the most in the last 20 years with great efforts to restore and showcase the importance of the historic Harbor of New York with a modern touch. Here, we can discover some hidden gems such as Cannon Walk, original 18th & 19th centuries buildings as well as learn how NYC became the economic powerhouse that is still today. We will walk around the new Pier 17 rebuilt after Hurricane Sandy destroyed the old wooden structure, and we'll enjoy great views over the Brooklyn Bridge.

Tour Price:
$56.25 per person, based on minimum 4 participants

How long is the walk?


WEATHER NOTICE: All Walking Tours are performed rain or shine, please check the weather and dress appropriately. It is at the discretion of the operator in case of extreme weather conditions or for reasons of force majeure to decide to cancel the tour or to postpone it to a later date. If the alternative date is not conducive to the customer, the tour will be refunded completely.
Please note that all venues included in the tour description, including, but not limited to, restaurants, attractions, and museums may change without prior notice in the case of impediments imposed (closing roads for events, weather ect.)

The Financial District Walking Tour departs from the southern-tip of Manhattan – Bowling Green right by Battery Park. There are a few subway stops in the vicinity. The closest would be Bowling Green Station (4, 5 green line) and the South Ferry/Whitehall Station (R, W yellow line and 1 red line.)
Alternatively the Wall Street Station (2, 3 red line) and then walk 8 minutes to the starting point. For those that prefer traveling by water, the closest Water Taxi Stop will be Pier 11 Wall Street (all lines available) and then walk 10 minutes.
Lastly, you may also reach the departure point by Taxi/Uber by providing the complete address – 1 Bowling Green, New York, NY 10004.

From $56.25
Secure Checkout + Pay Later Option*
We are your local Tour Agency in New York City