You are here: Around NYC with Irene | 10 Top Secrets of Times Square

The World's Most Visited Destination

Categories: Around NYC with Irene
The economic crash of the early 1970s led to a mass exodus of corporations from Times Square. Billboard niches went dark, stores shut and once grand hotels were converted into single-room occupancy dives, attracting the poor and the destitute. What was once an area bathed in light and showbiz glitz became a dirty den of drug dealers and crime.

That all changed with tough-talking mayor Rudolph Giuliani, who, in the 1990s, forced out the skin flicks, boosted police numbers and lured a wave of 'respectable' retail chains, restaurants and attractions. By the new millennium, Times Square had gone from 'X-rated' to 'G-rated,' drawing around 50 million visitors annually. Check these 15 top secrets about the intersection of Broadway and Seventh Avenue, A.K.A. Times Square.


Index: Times Square and the 10 Top Secrets of the World's Most Visited Destination 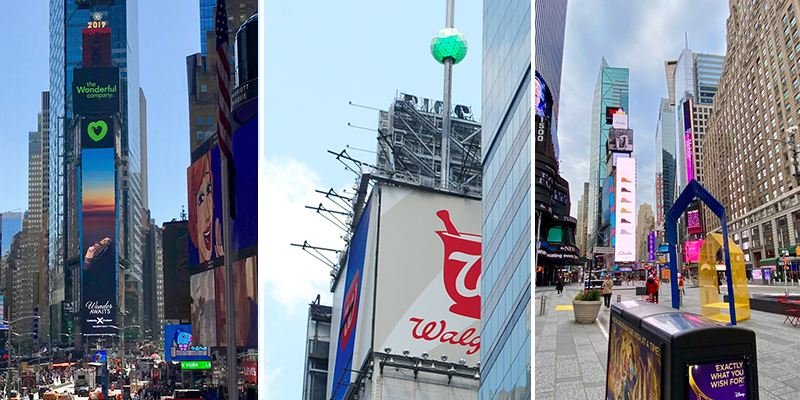 10 - One Times Square is wildly profitable despite being mostly empty

The iconic building at One Times Square is best known for the New Year's Eve ball drop, and in fact, there's little else there. It was originally constructed as the New York Times headquarters in 1904, back when the area was largely undeveloped. Lehman Brothers bought the building in 1995, and turned it into the giant billboard it is today. Jamestown Properties, which rents out the three bottom floors and the top floor, where the New Year’s Eve ball is stored year-round, currently owns it. Most of the floors are vacant, covered in graffiti and decrepit, but the billboards generate over $23 million per year.

Originally known as Long Acre (also Longacre) Square after London’s carriage district, Times Square served as the early site for William H. Vanderbilt’s American Horse Exchange. In the late 1880s, Long Acre Square consisted of a large open space surrounded by drab apartments. Soon, however, the neighborhood began to change. Electricity, in the form of theater advertisements and street lights, transformed public space into a safer, more inviting environment. Likewise, the construction of New York’s first rapid transit system, the Interborough Rapid Transit Company (IRT), gave New Yorkers unprecedented mobility in the city. The announcement of the IRT spurred real estate speculation by shrewd businessmen who believed that increased foot traffic in the area would generate profits.
Adolph S. Ochs, owner and publisher of The New York Times from 1896 to 1935, saw an opportunity and selected a highly visible location to build the Times Tower, which was the second tallest building in the city at the time.
In January 1905, the Times finally moved into their new headquarters, built between Broadway and Seventh Avenue and 42nd and 43rd Streets. The previous spring, Mayor George B. McClellan signed a resolution that renamed the intersection of Broadway and Seventh Avenue from Long Acre Square to Times Square.

As you ascend to the roof of Walgreens Tower at 1 Times Square, you’ll see an access door. Opening it, you’re outside, a glow emanating from atop a flight of stairs. Walk up those steps, and you’re face-to-face with a New York icon: The New Years Eve Ball. Made of Waterford Crystal and LEDs, this 12-foot in diameter ball weighs nearly 12,000 pounds and is completely computer controlled.

That's enough energy to power approximately 161,000 average U.S. homes and twice the electricity required to power all of the casinos in Las Vegas. 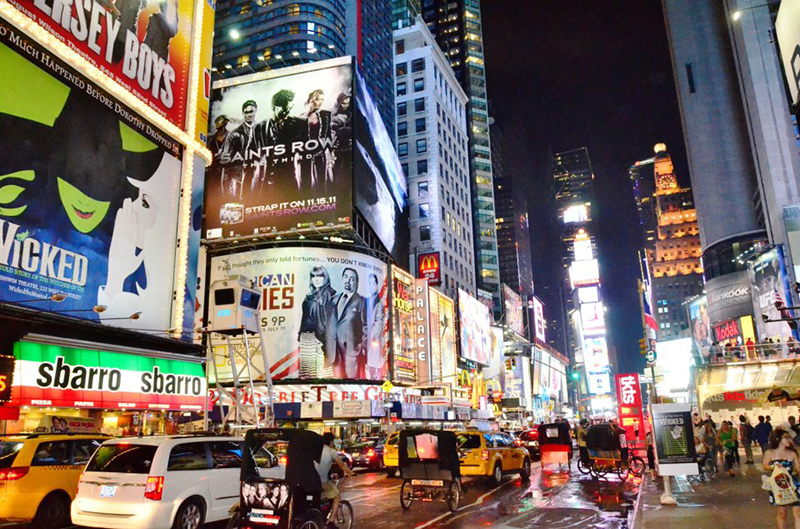 Times Square is generally accepted to be anywhere from Broadway and 40th in the east, 8th Ave. to the west, and 49th St. to the north. In fact, what many consider one of the most iconic parts of Times Square–the bright red TKTS, is not actually part of Times Square. It's Father Duffy Square, who is memorialized with a statue in front of the TKTS booth. Father Duffy was a decorated military chaplain during World War I and then later the pastor of Holy Cross Church on 42nd Street between 8th and 9th Avenues.

Despite its iconic and romantic reputation, 42nd Street between 7th and 8th Avenues was anything but that in the 1980s. In fact, that one block accounted for 2,300 crimes in 1984 alone, with twenty percent of those crimes being serious felonies such as murder or rape, as you can see in "New York Back in the 1980s."
But the same block is now home to Disney's New Amsterdam Theater, which led the Disney revival of the area when it re-opened the historic Beaux-Arts Theater with "The Lion King" in 1997.

Every December 31, more than one million people pack into Time Square to countdown he final moments of the year and watch a six-ton crystal-covered ball light up the sky. And when it does, a whopping one ton of confetti pours down on the crowd. But, these aren;t jus any tiny pieces of paper. They are wishes.
Throughout the month of December, people from all across the globe visit the wishing wall at the Broadway Plaza between 42nd and 43rd Street to write their “wishes” on pieces of official Times Square New Year’s Eve confetti. Sometimes, the messages are personal goals, other times, they are dreams for the future. Then, on December 31, the wishes are collected and added to confetti cannons that shoot out on the crowd gathered down below. Pretty cool, right?
Those that still want to make a wish, but can’t make it to Times Square (we don’t blame you) can visit the online wishing wall and write a message to be included in the New Year's Eve celebrations. But don't share anything you would not want the whole world to potentially read. Throughout the evening of December 31, various wishes are shared on Times Square NYC's official twitter feed and webcast. 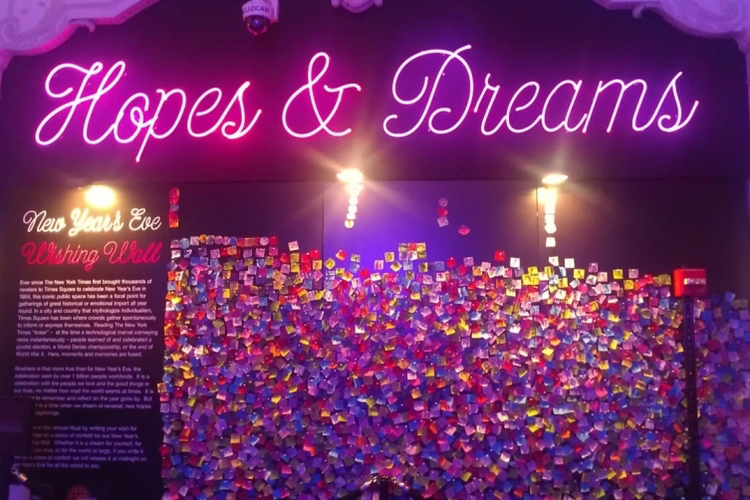 3 - Adults use diapers during New Year's Eve in Times Square

Yes! That's true. Develop a Bladder of Steel: Wait, steel's inflexible. Make that a bladder of a high-strength, maximum-stretch rubber-like polymer. Because unless you're extremely lucky or very patient, you won't be seeing the inside of a bathroom for a while. Don't expect local restaurants or businesses to be sympathetic to your plight, either–after all, if they make an exception for you, it'll be that much harder to keep the other million or so attendees from hogging their toilets.
So go to the bathroom before you find your place in Times Square. Or be lucky enough to have a friend who lives nearby who'll let you use his or her bathroom. Or better yet, wear an adult diaper, like more folks than you'd care to know do. Or... Don't go. That's the first piece of advice any New Yorker will give you when you tell them you want to see the ball drop in Times Square.

If you want to spend $20 for a martini, be my guest. But there's a hidden gem in the heart of Times Square that New Yorkers love to go: Jimmy's Corner. So, when you visit Times Square, make it a point to hit up Jimmy's Corner, founded by boxing trainer Jimmy Glenn in 1971. Here the jukebox plays jazz, there's always a seat at the bar and $3 pints.

On August 14, 1945, Alfred Eisenstaedt took a picture of a sailor kissing a nurse in Times Square, minutes after they heard of Japan’s surrender to the United States. Two weeks later LIFE magazine published that image. It became one of the most famous WWII photographs in history (and the most celebrated photograph ever published in the world’s dominant photo-journal), a cherished reminder of what it felt like for the war to finally be over. 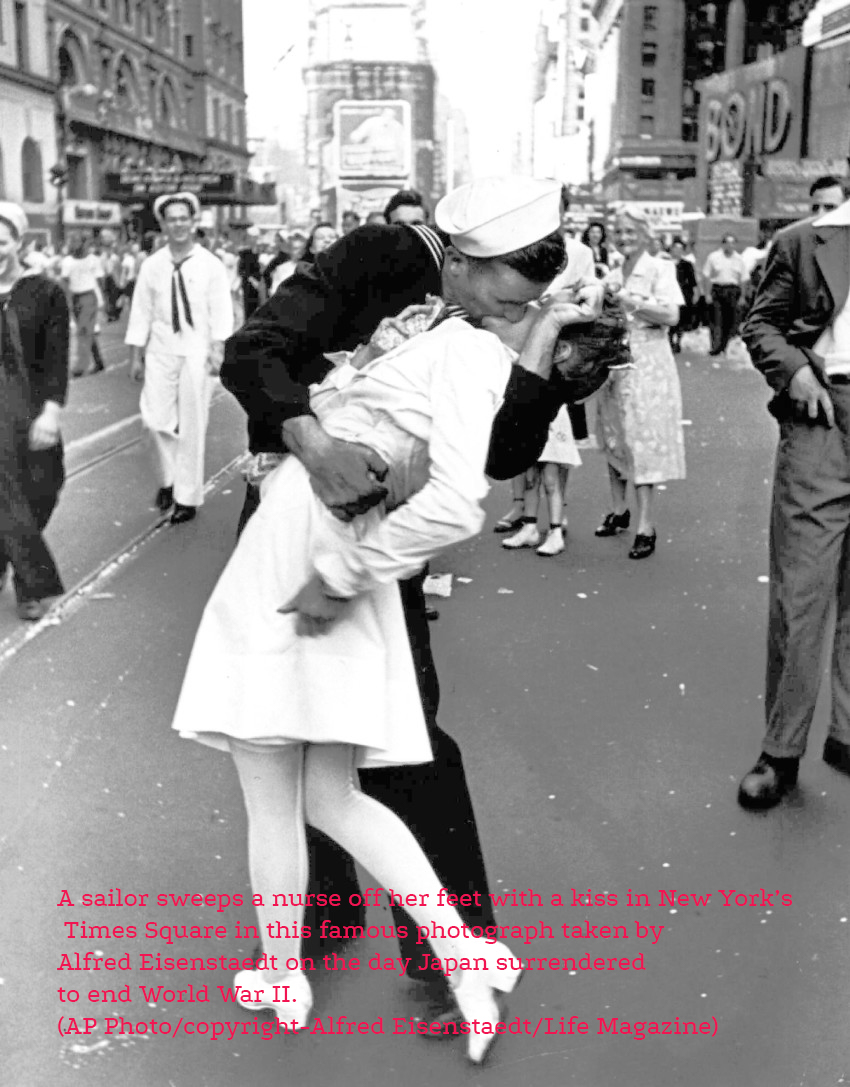 Everyone who saw the picture wanted to know more about the nurse and sailor, but Eisenstaedt had no information and a search for the mysterious couple’s identity took on a dimension of its own.
For almost two decades Lawrence Verria and George Galdorisi, authors of the book "The Kissing Sailor: The Mystery Behind the Photo that Ended World War II" were intrigued by the controversy surrounding the identity of the two principals in Eisenstaedt’s most famous photograph and collected evidence that began to shed light on this mystery. With this book, the authors solve the 67-year-old mystery by providing irrefutable proof to identify the couple in Eisenstaedt’s photo.
But the intriguing part is that George (the sailor) and Greta (the nurse) were not actually a couple. At that time, George was going out on a first date with another woman, Rita Petry–who later became his wife. You can spot her on the picture looking over his shoulder.Rita Petry says she's never been mad that on their first date, husband George Mendonsa kissed a woman he thought was a nurse to celebrate the end of WWII. Mr. Mendonsa died of natural causes in 2013. He was 86. The sailor and the nurse pictured kissing in 1945, were reunited in Times Square 67 years later–in August 2012.

There's a 1930 Bus Station Hidden in Hotel Carter. The Hotel Carter used to be Hotel Dixie. It was open in 1930 and served as a bus depot for the Central Union Bus Terminal. Buses would enter on West 43rd and then go underground to a turntable on the ground, which is still visible today.

The Hidden Sound Art
Between Broadway and Seventh Avenue (45th and 46th Streets) there's a hidden sound installation under a subway grade that's been mystifying New Yorkers since 1977. Max Neuhaus was the "sound sculptor" behind the installation, which emanates a percussion sound when passersby walk over the subway ventilation grate.

The Hidden Sushi Bar
Sake Bar Hagi features authentic Japanese fare but what makes it's storefront is hidden. So, it's not packed with tourists, a rarity for a Times Square restaurant.

The Midnight Moment
Every night at 11:57PM, fifteen screen in Times Square shut down at the same time and display art for three minutes. It's called the "Midnight Moment".

surely you will have seen Times Square filmed at all hours of the day and night, in all seasons, during events and holidays ... always colorful, bright and crowded ... but now here is a Times Square that we hope not to see again .. .

Video - Times Square at the time of COVID-19