Main Menu
You are here: Around NYC with Irene | Wall Street - The History

The Bull and Its Epic Story

Wall Street, today a synonym for power and money, has withstood its share of chaos–market crashes, bombings, recessions, Occupy movements – in its years as the financial center of New York. Resilience is even in the street’s name, as it pays tribute to the Dutch wall that once stood in the seventeenth century as protection from hostile British and Native Americans. That Dutch fortification almost wasn’t built, however, because of a few unruly residents: a herd of persistent pigs (and not metaphorical ones, either).

The History of Wall Street

The wall began as a picket fence in 1653 before the Dutch slowly expanded it to a 12-foot-high barrier over the years. At the time of the fence’s construction, the settlers let their livestock run loose around the settlement, and the hogs often uprooted orchards and gardens. Many of the animals foraged in areas along the wall, interfering with its construction. In a letter addressed to the city government in March 1653 (during the wall’s construction), Dutch Director-General Peter Stuyvesant urged the government to take precautions against the pigs at nearby Fort Amsterdam. He detailed with “great grief the damages, done to the walls of the fort by hogs, especially now again the spring when the grass comes out.”

Prepared in the summer of 1660 by New Amesterdam's surveyor general, Jacques Cortelyou, the celebrated Castello Plan - named for the Florentine villa where it was rediscovered in 1900 - offers a breathtaking aerial view of the colony in the first years of Dutch rule. Then, as now, Breede Wegh (the larger street on the map) -- later Broadway -- ran south to the Bowling Green, where the famous Charging Bull (or Wall Street Bull or Bowling Green Bull) statue now stands.

The gently curving canal that once cut into the heart of the closely built-up town, runs along of the present-day Broad Street, nearly all the way up to the 2,340 feet wall -- built where Wall Street now stands. 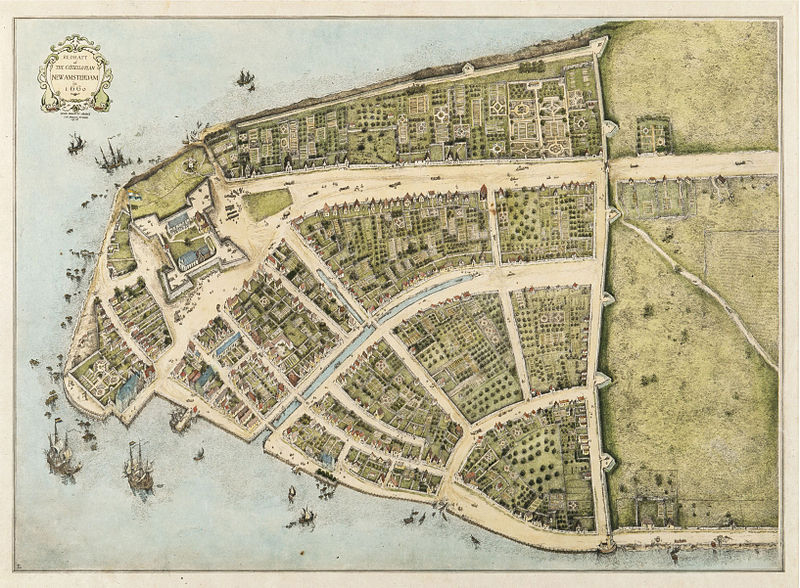 Redraft of The Castello Plan (the bigger construction on the right), New Amsterdam, 1660.

With its limits sharply defined on all sides by the man-made wall and two great rivers (East and Hudson), the city was a kind of miniature of Amsterdam, whose density and compactness made it convenient for business and easy to defend.

In the detailed map above, 342 houses and buildings can be seen, along with the stout ramps of Fort Amsterdam, the company pier and windmill, and the tidily laid out gardens, orchards, and backyards.

The Wall Street Bull and Its Epic Story

It was one of the coldest months on record. It was a very dark morning. December 15, 1989 at 1 a.m.: the date and time when the a huge 7,100 lb. (3,200 kg) bronze sculpture – created by Arturo Di Modica and his friends – was installed in front of the New York Stock Exchange. They were doing something illegal, though.

Arturo Di Modica, the Italian-American sculptor first conceived the Charging Bull as a way to celebrate the can-do spirit of America – and especially New York, where people from all other the world could come regardless of their origin or circumstances, and through determination and hard work, overcome every obstacle to become successful. It’s this symbol of virility and courage that Arturo saw as the perfect antidote to the Wall Street crash of 1987.

I tell people: the bull is not fighting - it represents a stronger economy and consequently a better world for young people in the future. — Arturo Di Modica, Italian sculptor of the world-famous Charging Bull.


Arturo was born in Sicilia, Italy in 1941, and moved to Florence in 1960 where he opened his first studio. In 1973 the artist moved to New York and rented a studio in SoHo on Grand Street. Later he built his own studio on 54 Crosby Street in the Soho district of Manhattan.

It was his most ambitious and massive work of sculpture to date, so large that the Bull had to be cast in separate bronze pieces and then laboriously welded together and hand finished. Once completed, at the end of 1989, it weighed over three and a half tons, and measured 18 feet long (5.5 meters). The 'Charging Bull' was the third - and at last successful - attempt of the artist to install his own statues on New York streets without permit.

In 1977, he dropped several marble statues in front of Rockefeller Center.
The second time, in February 1986, he put a big bronze horse in front of Lincoln Center. "It was a Valentine's gift to all the people in New York who are in love," he said. In 1999, Arturo Di Modica was selected for one of the most prestigious annual awards given in the United States: the Ellis Island Medal of Honor. The sculptor spent US$360,000 of his own money, and over two years of work, to create and weld together the final pieces of the slick, powerful-looking bull. It was designed to be a Christmas gift to the city. 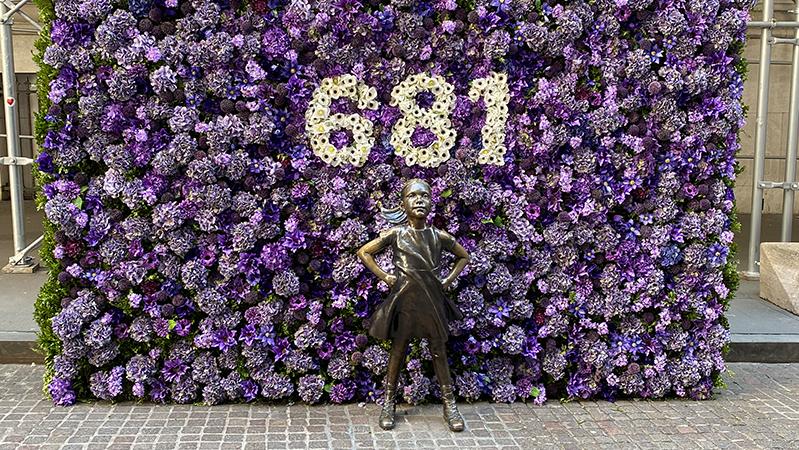 Since December 2018, the Fearless Girl has found her place right in front of the New York Stock Exchange


The dropping of the bull on Wall Street needed to be done when the police was not there. To place the sculpture in a public area, he needed a permit. Since he didn't have a permit, the installation would be considered illegal. On December 14, 1989, Arturo visited the location and check the police patrol time intervals.
He had a little bit more than four minutes to drop two and a half years his work. When the artist and his crew arrive on that cold and dark morning of December 15, they saw a Christmas tree installed on the place they chose for the bull. Then, they decided to place the statue on the yellow center line of Broad Street, outside the exchange, facing Wall Street right under the tree. That would be the perfect spot, since the original plan was dropping the bull as a Christmas present to New York.

The executives at the New York Stock Exchange were not nearly so amused. Perhaps mistaking the bull for some sort of Trojan horse. Though there were no Athenian soldiers lurking inside, ready to jump out and spear the Masters of the Universe, apparently NYSE Chairman Richard Grasso didn’t want to take his chances, Di Modica recalls.
The police were called in, and when they proved unwilling or ill-equipped to run an 18-foot-long bull out of town, the exchange hired private contractors to remove him. The beast was hauled off to Queens. Lower Manhattan businessman, Arthur Piccolo of the Bowling Green Association, read the article about the transfer. He found Mr. Di Modica in the phone book. They spoke and met later that Saturday to survey the space at Bowling Green Park, a few blocks from the NYSE, as the future home of the bull. Following Mr. Piccolo, he reached out to Henry Stern, the NY Parks Commissioner, who in turn contacted the, then mayor of New York, Edward Koch. Mayor Koch said YES immediately. The NYSE refused to release the bull from storage until the artist Arturo Di Modica paid for all their storage cost and expenses to remove the bull.

It now attracts tourists posing for photographs and investors superstitiously rubbing its horns for good luck. The bull is now seen as a symbolic mascot for New Yorkers and for the world.

Information on The ONE Observatory & The Oculus

Categories: What to see - Monuments & Attractions

Street Food Around The Big Apple

The Art of The Street Food

Categories: What to see - Neighborhoods

Statue of Liberty and Ellis Island
From 75.00 USD

Skyline Views from Hoboken
From 75.00 USD

The Sightseeing FLEX PASS
From 74.00 USD
We are your local Tour Agency in New York City