Main Menu
You are here: What to know | The New York Subway - The MetroCard Guide

Categories: What to know
Page Index – The New York Subway - The MetroCard Guide


The new payment system, called OMNY, should be available on all New York subway and bus lines by the end of 2020.
As part of the initial rollout & testing phase, riders will be able to take advantage of this new system on the 4/5/6 lines between Grand Central-42nd Street and Atlantic Avenue-Barclays Center station, and on all Staten Island buses.


Any credit card, such as Visa, MasterCard or American Express, with the WiFi/contactless logo placed on the front or back of the card can be used to pay at these new turnstiles.
To use an iPhone or an Apple watch, you must update to the latest version of iOS, then from the settings select Wallet and Apple Pay. From here, choose Express Transit Card to enable express transit mode so that it works automatically without Face ID, Touch ID or passcode ID. Then, hold the phone close to the reader to pay for the ride. A checkmark on the display will appear at the end of the transaction.

With an OMNY account, you can view your travel history, manage saved payment methods, check charges and contact 24/7 customer service. The new OMNY system is only available on a pay-per-ride basis (single ride) for any other type of fare, such as weekly or monthly passes, you must continue using the classic MetroCard at the moment.

Daily commuters will be the real testers of this new payment system. As an added incentive, MasterCard cardholders who elect to pay with the new OMNI system on Fridays in June and July will receive a refund of the fare paid.
Now let's see how the New York Subway works.

The New York subway is among the most extensive subways in the world with as many as 27 lines identified by letters A B C and/or numbers 1 2 3 and different colors.

In Manhattan, the lines run for the most part north-to-south and vice-versa (connecting uptown Manhattan to downtown) and therefore they run along the Avenues, on the other hand, there are only a few lines that cross the city East-to-West and are all located in Midtown.

The New York Subway runs almost entirely underground at different heights, but there are also few lines that are still elevated and some of them offer amazing views of the city!

Trains are frequent, every 2/5 minutes, especially during peak hours (7:30-9:30 am and 4:30-6:30 pm) in Manhattan, while waiting times are longer during the weekend (8 to 10 minutes) and generally in the outer boroughs of The Bronx, Brooklyn, and Queens.

The Subway runs 24/7. The trains can be Local or Express, the local ones stop at all stations while the Express trains stop only at some selected stations along the line. 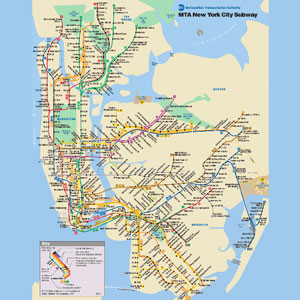 If the New York Subway is the most used method of transport by all New Yorkers, there must be a reason. Despite its many flaws, it is simple to use and remains a safe way to move across Manhattan in the fastest way possible cutting all city traffic especially during rush-hour as well as reach the furthest areas of Brooklyn, Bronx, and Queens without spending a fortune.

For tourists, it is also a cheap way to explore the city. See below for prices, tickets and MetroCard option. You can download the map directly from the official website, you will also find a paper copy available for free in subway stations with ticket booths.

The Most Important Subway Stations

The Subway System in New York, although not the largest perse, is the one with the most extensive reach and the most number of stations in the world ... 472 stations!

Clearly, the most important and centrally located ones are used by locals, as well as tourists, on a daily basis, and are those that easily lead to the main attractions. Let's see some of them in detail:

The cost of a single ticket (Single Ride) is $3.00. and is sold only at the MTA vending machines located inside the subway stations.

However, even if you think to use the Subway very little, it is still more cost effective to purchase at least one Pay Per Ride MetroCard (regular). Pay Per Ride MetroCard is nothing but a rechargeable card that will allow you to pay each individual ride at the reduced fare of $2.75 fee. You are free to re-load the Metro Card as many times as you like, plus at any station, you can swipe as many as 4 times back-to-back meaning 4 people can share the same card. The same MetroCard is also valid for the Bus Network. See The Autobus Page.

As we have seen, the reloadable MetroCard is worthwhile if your stay is less than a week and if you expect a moderate use of the subway, the card can be reloaded from a minimum of $ 5.50 up to $ 80.00. The same card can be used in the same station for up to 4 people. At the turnstile, you just swipe the card and let each person go through the gate one person at a time.

If your stay is a week or longer and you plan to use the Subway (or NYC Buses) consistently, then you have two other types of MetroCard valid for unlimited travels. For the Unlimited option which is valid either 7 or 30 days, the card can only be swiped once at the same station and therefore is valid for one person only.


When you buy a new MetroCard, you are charged $1.00 fee, so keep it handy and reload the same card and you don't have to pay the fee again.

Where to Buy the MetroCard

The MetroCard can be purchased directly at the station, almost all stations have automatic ticketing booths called Vending Machines, and in some, but rarely nowadays, you can still find the original ticket-booth with counters open to the public. Also, any shops and newsstands that display the MTA logo, sell the MTA Cards.

To purchase the MetroCard, the vending machines accept both credit & debit cards and cash.

The Subway operates 24 hours a day and almost all the stations remain open overnight, at the very least all the main stations in the central areas of Manhattan are always open unless closed for constructions and/or repairs. However, always check that the station you need to use is operational even at night just to be safe.

To the question -- "Is the New York Subway safe at night?" the answer is, for the most part, yes if we are talking about stops in the central and touristy areas of Manhattan. On the other hand, I don't really think that during your stay in NYC, you will venture at night to faraway places located in remote areas of the Bronx or Brooklyn ... If your hotel or apartment is located outside the most known touristy areas, make sure you have a nearby subway stop that is operational even at night and then use your discretion, and as a reminder, the cost of Yellow-cab and Uber in New York is not tremendously excessive and in some cases it is better to take a car!

The New York Subway is pretty simple to use once you get used to it and you just need to have the Map on hand or on your phone to find your way around. The subway lines run mostly south / north along the avenues in Manhattan, just pay attention to the direction: Uptown with Then Bronx and Queens will take you further north of where you are located, and in the Bronx and Queens, whereas the Downtown direction with Brooklyn will take you further south of where you are and to Brooklyn.

The direction can always be found clearly posted at the Subway entrance before going down the stairs alongside the Name/Color of the lines that service that station. Also, pay attention to the type of line you are about to board whether it's local or express. Express lines are faster and more convenient but make sure that the express train will stop near the place you are trying to reach.

If you have any doubts or question, you can also get in touch with us on our Chat. Here some general advice on how to use the NYC Subway and some general rules to follow for proper etiquette and safety --

With The Best Rooftops Incl.
NY All-inclusive PASS
Save on 100+ Attractions and Activities - No limits on how many you can visit!

If you want to organize personalized tours on foot or by car with a guide both in New York and outside the city contact us -- Email-us
Traveling to New York? See our exclusive Tours and Offers