Main Menu
You are here: Around NYC with Irene | Where to eat Oysters in New York City


Categories: Around NYC with Irene
Finding fresh and good oysters in New York is not that difficult. Oysters are offered in classic restaurants, steakhouses, bars, waterfront kiosks, and on boats too!!

Sitting outdoors overlooking the bay, savoring oysters accompanied by a good glass of wine is one of the experiences to do especially in the summer season when sitting outdoors with a light breeze becomes really pleasant.

Let's see a few options together. 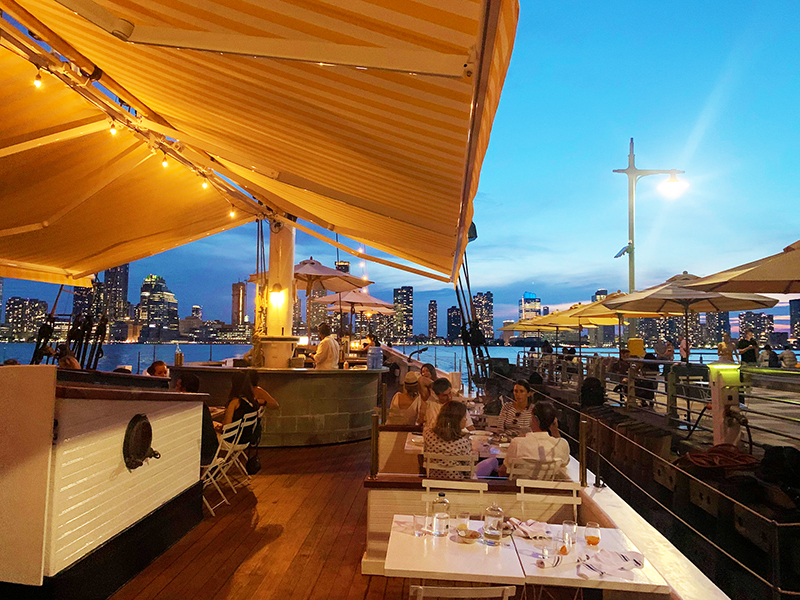 Today, I'm taking you to one of my favorite places in the city. The boat is located on Pier 25 along the Hudson River Park. The closest subway stops are Franklin Street (Line 1) and Chambers Street (Line 1,2,3 or A, C).
Opening Hours: Monday - Friday from 11:00 to midnight - Saturday and Sunday from 10:00 to midnight (brunch until 2:00 pm)

The History of the Grand Banks

The Grand Banks Boat is so much more than a simple restaurant. We are talking about a historic wooden schooner -- the Sherman Zwicker built by hand and launched in 1942.

Its history begins as a fishing boat, it was part of the Grand Banks fleet plying the turbulent North Atlantic waters. It traded in cod and salt throughout the Americas. It was the latest in a fleet of large wooden schooners and was station in South Shore, Nova Scotia during the summer until 1968.

Later it was sold and brought to Maine where, after being fully-restored, became a museum ship. Control of Sherman Zwicker passed to the Grand Banks Schooner Museum Trust and became a traveling museum. For nearly 30 years, she spent her summers docked at the Maine Maritime Museum in Bath, Maine, where she hosted tens of thousands of visitors each season.

In 2014, the Grand Banks Schooner Museum Trust donated the Sherman Zwicker to the Maritime Foundation to ensure its preservation for future generations.

Here you have the opportunity to taste delicious fish dishes, not just oysters, and enjoy the splendid panoramic views of the Hudson River, the harbor of New York, and the Freedom Tower.

Other Recommended Places for Oysters and Views