How to celebrate the New Year's Eve in New York

When you say New Year's Eve in New York, you immediately think up one of the most famous events that takes place every year in Times Square; a great show broadcasted worldwide with live music, great performances and the famous Ball Drop. In the iconic Times Square, every 31st of December, there are at least a million people present and over a billion tuned in from all over the world to watch the countdown from the Times Square’s clock which has now become a worldwide tradition.

The schedule for this year Times Square New Year's Eve show will be available in early December (you can check previous years - New Year's Eve in Times Square Program) but as always we expect some big names of the entertainment and music industry. We remind you that there is no Pass that gives exclusive access to the Times Square NYE Show, which is by the way totally free, the only way you get in is arriving in Times Square in the early afternoon hours and access one of the corrals as directed by the local authorities. It’s all first-come, first-served, so the earlier you get to Times Square the closer to the stage corrals you find. If you choose to attend dinners or events held in Restaurants / Clubs located around Times Square with the reservation you are given a PASS that you will present as your “passport” to reach the venue you have booked.

Are you planning to spend New Year's Eve in Times Square? Let's see at what time the streets are shut down:

When Does NYE Party begin in Times Square

Tips for Watching the New Year's Show in Times Square - The Ball Drop:


(From the official Times Square Alliance website): WARNING: Multiple Venue/Pay-One-Price/All Access Pass Alert -- There are companies that offer Multiple Venue/Pay-One-Price/All Access passes which advertise access to Times Square on New Year’s Eve but that is actually not possible. These companies advertise these passes as allowing the holders to visit numerous venues throughout Times Square on New Year's Eve. Such Multiple Venue/Pay-One-Price/All Access passes presume the holder will be able to get past police security lines. In years past, such pass holders were refused access beyond police checkpoints, leaving the holders that were refused access beyond police checkpoints frustrated and without a place to go. It is reasonable to assume that the police will take the same stance this year.)

If all this discourages you, think that roughly one million people every year try to arrive in time to participate at this crazy event and the first New Year's Eve Ball Drop celebration was held in 1904! For some people, it must be worth it!

At 11.59 pm the colored and illuminated ball begins to descend from the spire of the One Times Square building and the countdown begins!


By now, we should have realized that the New Year's Ball Drop party in Times Square requires some "sacrifices" on our part, but it is also true that New York offers many other possibilities for the evening  ... celebrations, events, and fireworks are offered in all the districts of the city, so here are some tips for spending this special evening without having to spend crazy
money, mixing up with New Yorkers and certainly with some extra comfort!

Let's see some of the most followed Free Events in New York:


What to do on New Year's Eve in New York

Fireworks at Midnight on NYE


Another classic NYE Event are the Midnight Fireworks that are shot in different areas of New York. For a breathtaking views, you can go up to one of the observatories, recommended the Empire State Building or the new ONE WORLD. Fireworks are also launched in Central Park and near the Statue of Liberty. To really admire the main fireworks show in the New York Bay and over the Statue of Liberty, we advise you to choose one of the dinner cruises in the Bay of New York.

Our New Year's celebrations in New York include the Dinner at Times Square eatery The Swing Club and some elegant and fun Cruises along the Hudson River carefully selected to meet different needs and budgets. Visit our page dedicated to:

Planning the New Year's in New York can be difficult, you always have to book in advance, the prices are high everywhere, traffic becomes impossible, taxis hard to find (remember Uber too) the subway is overcrowded, and the cold doesn't invite you to walk outside for long blocks. That's why the Cruises in the Bay of New York often become a perfect alternative to live a special evening with Dinner, Music, Dances and Midnight Fireworks in the Bay that illuminate the Manhattan Skyline.
There is a wide choice of cruises you can choose from ... from the New Year's Cruises for the youngest one, very informal with DJ music for the possibility of dancing the night away with Drinks and light appetizers at budget prices, to the Cruises with Buffet Dinner up to the most elegant and refined Cruises aboard luxurious yachts with 4 or 6-course plated Gala Meals served table-side, live music and midnight toast with a bottle of Champagne. All the cruises, regardless of the budget, are accompanied by music, dances and guarantee a first pick spot to view of the Fireworks in the Bay of New York! 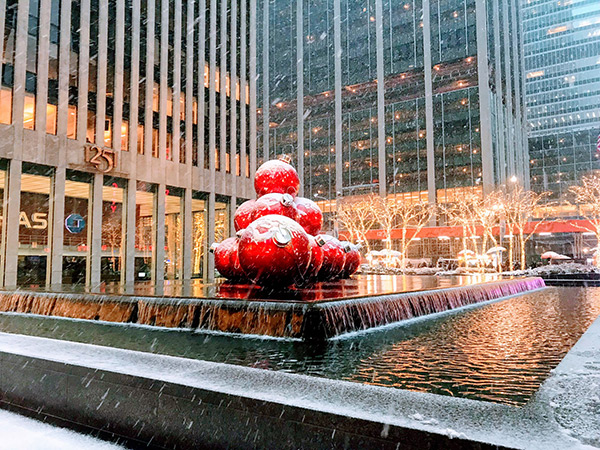 Are you going to be in town for the Holidays as well? Your Christmas trip to New York will remain indelible and you will surely find yourself wishing to come back again because New York at Christmas is pure Magic!!

It all starts right after the big Thanksgiving party with the famous parade. They will start by lighting up the famous tree in the Rockefeller Center Plaza, all the ice-skating rinks will be open by then, the Holiday Markets will populate squares and parks around New York, the windows of popular stores will "blind" you with brilliant lights and decorations, and the magic of Brooklyn with the famous Dyker Heights's Homes will transport you into a movie setting.

If you have any doubts visit our page on

The Old East Side Tour
From 75.00 USD
We are your local Tour Agency in New York City