Main Menu
You are here: What to know | Understanding The Neighborhoods of New York

Understanding The Neighborhoods of New York

What you need to know about the Big Apple

Categories: What to know
About New York

Manhattan is an island of approximately 15,000 acres, and is the third most populous district (approx 1.700.000 inhabitants) and the smallest by extension of the City of New York, although many times the name New York is used as a synonym of Manhattan, the latter is just one of the 5 districts that combined form NYC.

The five boroughs of New York City are Manhattan, Brooklyn, Queens, the Bronx and Staten Island. The island of Manhattan is surrounded by three rivers, the Hudson River, once called North River West (to the west), the East River (to the east) and the Harlem River to the north-east. Manhattan is the engine that drives the economy of the city, Wall Street is the national and international center of finance, whereas culture and entertainment bring tens of millions of tourists every year; the city exceeded well over 65 million visitors in 2019.


Now, let's see how Manhattan is divided: Manhattan neighborhoods, some historic others created more recently as real estate gimmicks to add value to the area, are differentiated for architecture style, history and ethnic groups that have populated each one.

Starting from the south we find the general area often referred to as Lower Manhattan, this is the area occupied by the first settlers back in 1625 when it was called New Amsterdam. Now, we find the Financial District, Battery Park, Tribeca and a bit further north some historic areas such as Little Italy, Chinatown and the Lower East Side neighboring the newer and trendier NoLita and SoHo. From down here you get to admire beautiful views on the Brooklyn Bridge!

Continuing north, we find the Greenwich Village with the West Village and the East Village. The Meatpacking District and the Far West Village are the two youngest areas that in recent years have undergone great renovations; just think of the new elevated urban park -- the High Line Park. Always continuing north, we meet the historic Chelsea and Gramercy. Around the Greenwich Village, we find the entire campus of the New York University, founded in 1831, now it boasts a presence of more than 50,000 students and is recognized as one of the top universities in the US. Washington Park has basically unofficially become part of NYU Campus!

How visit Lower Manhattan and the Villages 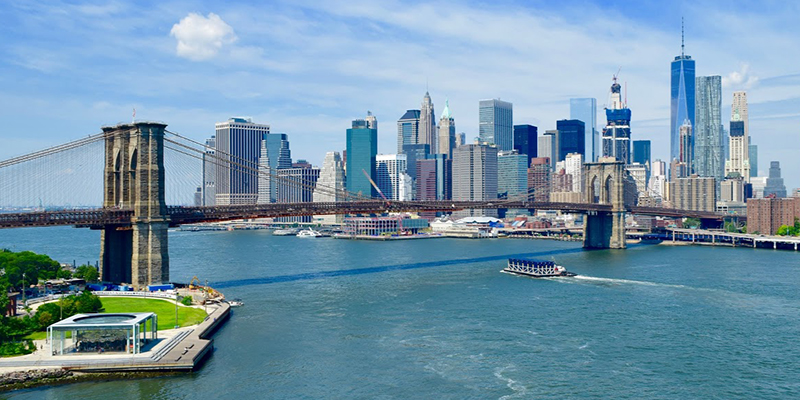 Around Midtown, we find the Garment District, Murray Hill, the famous Hell's Kitchen, now called Clinton, Broadway with the Theatre District and the famous Times Square. Theres is also a Diamond District, a short stretch of 47th street (starting from Fifth Ave and going West for 1 block) will find a myriad of jewelry stores and diamonds (who doesn’t remember the movie Marathon Man?). Midtown is also the area with the highest concentration of skyscrapers.

Continuing north, we meet the two most residential areas and, for many, the most beautiful areas to live in the city: the Upper East and Upper West Side. The two neighborhoods are divided by Central Park. In the Upper East Side along Fifth Avenue we have the Museum Mile, here are the most important museums of the city, it is one of the most affluent areas renowned for the many haut-couture stores, european designers, boutiques, antique and art galleries. Upper West Side is certainly more informal; the presence of the historic University, the Columbia University, gave birth to a vibrant neighborhood with many restaurants and pubs and places for young people. Beautiful the walk along Central Park West, the road that runs along Central Park with a series of remarkable historical buildings, including the New York Historical Society Museum (1908), reopened after a restoration in November of 2011, the Museum of Natural history (1892), the Dakota Apartments (1884), home of John Lennon and Yoko Ono.


How to vist Upper East and West Side, Central Park and Harlem

A littler further north, neighboring the Upper West Side, we find the neighborhood called Morningside Heights with the spectacular Cathedral of St. John the Divine, and Columbia University (founded in 1754) that relocated in its current permanent location in 1897.

Upper Manhattan with Harlem and Washington Heights are the most northern districts of Manhattan. In addition to the borough of Manhattan, we must not forget the other four: the Bronx, Queens, Brooklyn and Staten Island. Each of them rich in history and definitely worth visiting. To know a little more of these districts visit: Our small Trip Guide
Travel Guide

What you need to discover the Big Apple

Add 1 or 3 Attractions: choose on the list!
Hop On Hop Off
20+ convenient hop-off locations - Multilingual Headset