Main Menu
You are here: What to see | Monuments & Attractions | Rockefeller Center

Top Of The Rock, The Christmas Tree, Ice-Skating Rink & More

The Rockefeller Center is a complex of commercial buildings, theaters, plazas, underground concourse, and shops, developed principally during the depression, and it is now the largest privately owned businesses and entertainment center. Created by the oil magnate John D. Rockefeller, who decided to build a primarily commercial space, the first stone was laid in 1930 and construction lasted approximately 10 years. In 1987 it became a national Landmark.

The Rockefeller Center remains today a leading tourist destination in New York City with 19 buildings on 21 acres offering shopping, restaurant and other pleasant diversions. It also houses NBC headquarters and Radio City Music Hall. Guided tours are available at Radio City Music Hall and at NBC Studio, don't miss the opportunity to get a "behind-the-scene" look at the major network television in the US! The pedestrian area called the Promenade is characterized by the bronze statue of Prometheus, the symbol of Rockefeller Center.

The pedestrian area called the Promenade is characterized by the bronze statue of Prometheus, symbol of the Rockefeller Center. 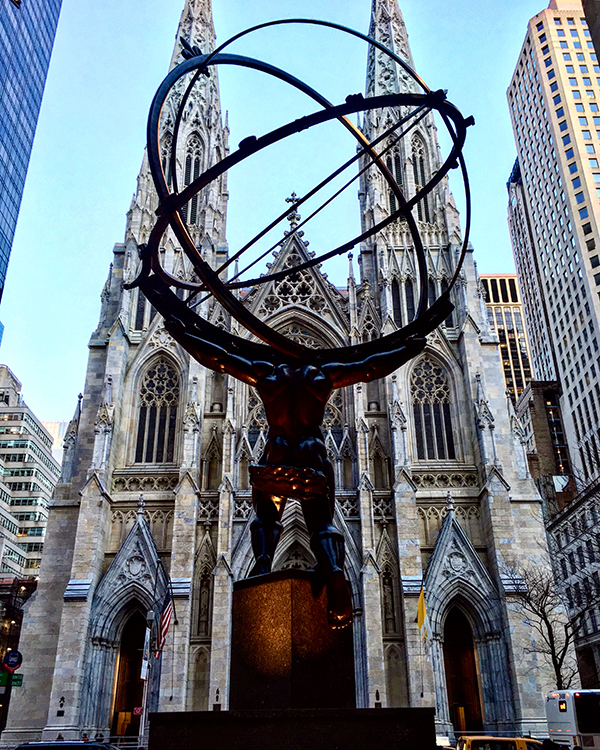 Rockefeller Center houses also the Observation Deck "Top of the Rock", opened originally in 1933 the deck underwent a major restoration and reopened in 2005. It now has 3 levels with indoor and outdoor viewing space as well as historical exhibits. From here you can enjoy incredible 360 degree views of all 5 boroughs. Buy now your admission ticket to the Top Of the Rock, you will immediate access to the Observation deck with preferred entrance!

During the holiday season, a gigantic Christmas tree is lighted up in the plaza (at the end of the Promenade) and during the winter months the famous outdoor ice skating rink is crowd of tourists and New Yorkers.

Tips on How to visit the Rockefeller Center

Buy now your admission ticket to the Observatory with immediate access and skip the regular ticket line.

With The Best Rooftops Incl.
NY All-inclusive PASS
Save on 100+ Attractions and Activities - No limits on how many you can visit!

From $154.00
Choose by number of days
The Sightseeing DAYPass
100+ Museums, Attractions & Tours

Where is located Rockefeller Center + Top of the Rock


Things to See Nearby

For any information please do not hesitate to contact us: Email-us

Do you want to know what is the best time to visit New York? The answer is easy: always! Let's see how to use public transport and learn how to get around in the Big Apple.

ESTA How to Enter the United States

What is the Visa Waiver Program